Characterization: The key of this attack strategy are the multitude of tanks represented by the golems and the Skeletons spawned by the witches.

The GoWiWi attack strategy is mainly used by high level players, however, it started to be used by smaller ones too. The name of this army comes from the 3 main troops which form this trio, the Golem, the Wizard and the Witch. Even if the army consists mainly on these three troops, it also has other troops in smaller numbers to help achieve the best results.


Things to consider!
- Never attack Th10s with both infernos set to multi-target! They will totally burn your troops so only attack them if you are really confident in your GoWiWi skills.

TH8:
TH8 can attack with GoWiWi if they get 2 witches in their CC, but those are usually not enough for a great attack. At this TH level, you aim for 3 stars and it is hard to achieve that with the 2 witches attack, therefore I will not provide any army composition for TH8.

1. The first thing you need to take care of when you attack with GoWiWi are the defender's Clan Castle troops. During a farming attack with GoWiWi there are less chances to find something dangerous or compromising for your attack; during a war attack there are all the chances to find a dragon or witches in the defender's clan castle, however, dealing with them prior to the main attack is not a MUST but sometimes can save an attack.
If you chose to drag the CC troops, then dealing with them in this attack strategy is much easier than in the GoWiPe attack. After you dragged the troops out of the base, you can deploy 1 archer, 2 witches 1/2 wizards and they will be more than enough to deal with the CC troops. If the defender has a dragon and you dragged it outside the base, then you will have to do the same as in the GoWiPe attack, to surround it with wizards.

CASE A: You are able to lure the CC troops using one or two Giants. 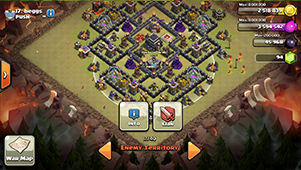 Having the possibility to check the radius you can set the points where you will drag the CC troops out of the defender's castle. In the example above, a simple giant can be deployed at the bottom of the base near the Archer Tower. Usually you will need 2 Giants to get the CC troops out.

CASE B: You are able to lure the CC troops, BUT using Hog Riders instead of Giants. Two or three Hogs should be enough. 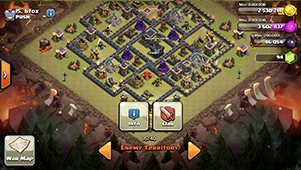 Here you will use the same principle as in the case A, you will deploy your Hog Riders and then slowly using one archer at a time you will drag the troops in a corner. Depending if the on the case, you might need 2 or 3 hogs to drag all the troops out of the castle. 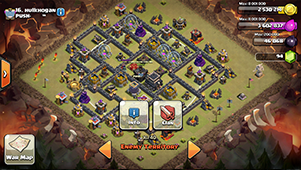 In this case you are unable to drag the troops out of the castle, not without using around 6 hog riders which will use too much of your army and might ruin the entire attack. In this situation, during a GoWiWi attack, you can skip the part of bringing any giants/hog riders and just go into the attack, since such bases usually hold wizards which are not such a trouble for the mass of skeletons.

2. After you finished with the CC troops (either dealing with them or ignoring them), it's time to deploy the army. In the GoWiWi attack strategy, you do this by deciding a line which you want to start your attack from. After you decided your line of attack, you will drop 1 golem in each end of the line and one golem in the middle of it, followed by a large line of wizards in behind and 2 Wall breakers for each Golem. After you did this, you will deploy all your witches, the cc troops, the heroes behind the golem in the middle! 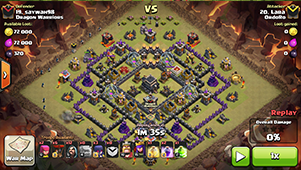 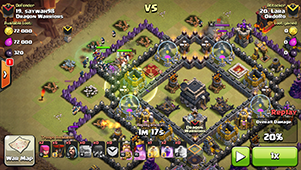 4. Once you reached this step, you should already have your troops in the central compartment of the base. Now is the time to drop your first rage spell and your healing spell. If you followed all these steps, you should by the end of this step already have reached the second star of the attack! For Th10s, usually the attack stops here because the chances of 3 stars are very rare. The next step is for Th9s ONLY!

5. As a TH9, in the army compositions provided you should also have some balloons left to deploy. You will deploy these after all the air defences were destroyed. The Balloons will be deployed against the defences which are hiding far away from the central compartment and represent a danger for the 3 star attack. You need to watch the video provided at the next step to see exactly how this is done. (I chose not to include any image for this step because it is easier to understand by looking at an attack.


I will not explain the whole attack; if you want an explanation for all the steps, check the chapter before this. This video is for the only purpose of showing the need of balloons in the GoWiWi attacks and how they make the difference between a 2 star and a 3 star attack!

Congratulations! You achieved TOTAL DAMAGE!
Note: There was no certainty that without the balloons, the attack would've still been a 3 star.

NOTE: As a th9 you should usually aim for 3 stars using this attack! As a th10, the chances of getting 3 stars are mostly impossible so your attack will stop about the time of 50-60% overall damage.

This is all the information for the GoWiWi attack! Thanks for reading!

Photo Credits to the forums of Supercell.